Path of Exile: Powerful Bow Build for Clearing Monsters in Any Scenarios

Hey guys, do you want a build that can clear monsters off screen in Path of Exile? Do you want a bow build that doesn't struggle with scaling single Target damage, or maybe you're growing tired of all ways, so you're looking for a new method to destroy your CPU, then Lightning Arrow Deadeye is the build for you.

The most amazing things I love about this build is that, even when farming tedious mechanics like all the temples, the Lightning Arrow Dead Eye still clears so incredibly fast. It greatly minimizes the dreadful repetitions that are needed in order to set up a perfect build, even when you farming something as basic as Essences, the Deadeye can quickly kite in clear the necessary encounters, and leave the map before the monsters even knew what hit them.

The way this build works is just firing some lightning arrows into your enemies off screen, when you hit an enemy, the lightning arrows will smite your foes for some AOE damage. In a single Target boss fight scenario, play some ballista boys and begin firing everywhere. As enemies begin melting under the sheer power of these laser beams, you'll begin to notice a considerable drop in fps as well, but don't let that distract you from the fact that the boss is already dead.

For our Ascendancy, we're going with the most basic ascendancy for every bow build, the Dead Eye. For our ascendancy passives we'll want to run Endless Munitions, Ricochet, Focal Point and Gathering Winds. Endless Munitions and Vocal Point give us more damage, Ricochet gives us more clearspeed and Gathering wins makes everything go even faster. Need I say more? Clearly, this is the epitome of what every meta end game build should be. 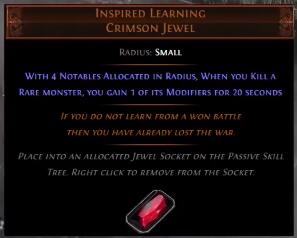 For our Defenses, we're running Grace, Determination, Define Banner and Inspired Learning. Inspired learning allows you to steal a single mod from every rare monster that you slay. Grace and Determination provide an incredible amount of flat evasion and armor, which also scale multiplicatively with the effects of defined.

Anyway if you want to know more inform, our site Poecurrency.com is your best choice for POE updates checking. Meanwhile, buy POE Currency in our web could enjoy our cheap price as well. It is time for you to come to our web and place order now!