Quick Guides on Curses Manifesto in Path of Exile 3.20 Expansion

Before 3.20 expansion,The Forbidden Sanctum comes out, the Path of Exile team has released a final manifesto ahead of the new content, this time on Curses. The manifesto covers all things Hexes, from changes, to new balance tweaks, and reworks.

When it comes to Curses, there will be some significant changes made in response to how the game and meta shifts happened, as well as due to other changes that Grinding Gear Games has been making. The manifesto emphasizes changes to Curses, but more or less, Hexes, going forward into the new 3.20 content. 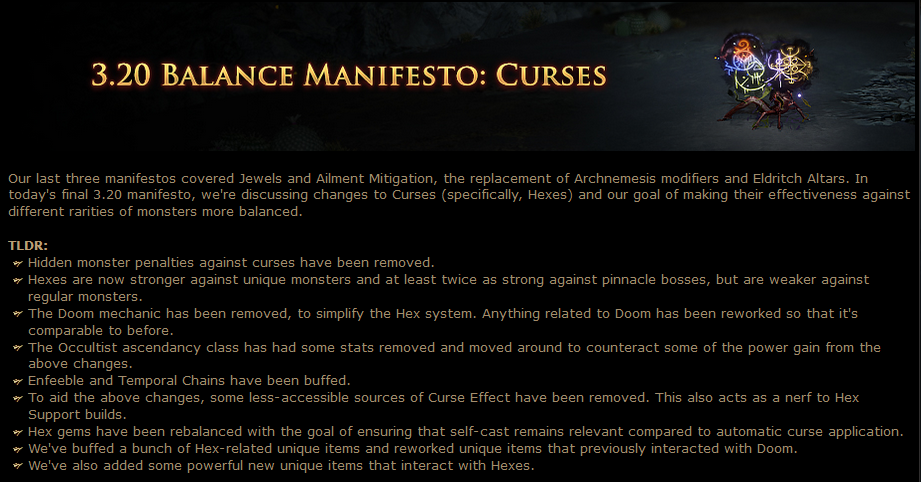 In order to simplify the Hex system, they're removing the Doom mechanic. This won't leave a gap since, in making this decision, they'll be reworking anything related to Doom to preserve comparable functionality. Hexes will also work a bit differently in that they'll be weaker against regular monsters, but stronger against unique monsters and bosses. Some other mechanics are also getting reworked or buffed, like Enfeeble and Temporary chains. Hex Gems are getting reworked too, in order to preserve the viability of self-cast.

When it comes to Hexes getting different effectiveness when it comes to monster tiers, the purpose of the changes is to offset hidden penalties that were reducing their effectiveness when you fight unique monsters or bosses. Unique monsters and bosses do have hidden penalties when you fight them, which helps increase the difficulty as needed, but the way HExes work has been particularly significant. These changes will effectively balance so that they'll be equally effective against all monster types.

Doom being removed is also coming down to effectiveness. One of the reasons behind removing it was that it added a lot of unnecessary complexity to hex-related mechanics.

Overall, these changes are intended to refine Hexes and make them viable for all kinds of playstyles. You can read the full details in the Path of Exile manifesto on Curses.

Path of Exile is a loot-based action RPG that had the very lofty goal of building upon its inspiration and going beyond the Diablo series in terms of role-playing flexibility. It did more than achieve this by introducing deep lore, competitive PvP, interesting POE Currency system and a unique passive skill tree system that allowed for diverse build variety and a huge amount of replayability.

Since its release, it has had a whole host of new story content, skills, gear, and expansions added to keep you busy for years to come. As a free-to-play experience, the game is still enjoyed daily by players around the world, often outnumbering the likes of the Diablo series with its concurrent players.

We'll be sure to keep you up to date on all the Path of Exile 3.20 news ahead of the next expansion as the game rolls slowly towards becoming Path of Exile 2. GGG also recently announced its new Path of Exile Ruthless mode, an extremely hard difficulty modifier for hardcore players. If you want to know more, make sure following Poecurrency.com for the latest news and updates.